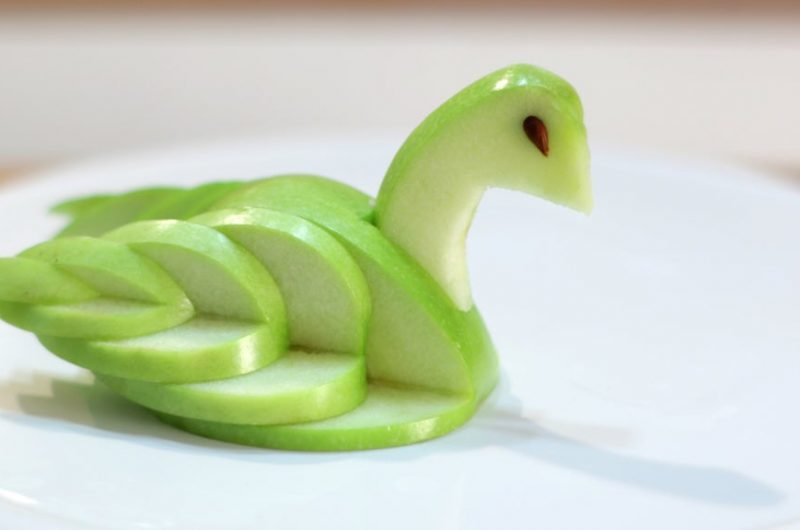 In this blog post I will show you how to make an apple swan garnish. This awesome apple carving is perfect to bring to parties or maybe you just want to spruce up the dinner table.

It is fun to get creative once in awhile in the kitchen and this is something really creative that you can do which doesn’t take a whole lot of time and no baking or decorating required, just some knife skills. But don’t get me wrong, you don’t have to be an expert with a knife. Only basic knife skills are needed.

This apple swan idea has been around for many years, it was probably made the most famous by The King of Random, may he rest in peace. Time to impress your friends and family with this amazing apple swan. Let’s get started!

In order to make an apple swan you need just a few ingredients and tools:

Step 2: How to make an apple swan

Begin by cutting the apple in half, but not exactly in half cut it at a slight angle off-center, so you will be left with two halves, one large half and one smaller one.

Remove the seeds and save them, they will be used later for the eyes.

Now it is time to created the two main wedges for the inner most part of the wings. Place two butter knives or pieces of wood that are about 1/4 inch thick on both sides of the larger apple half. They should be perpendicular to the apple.

Find the middle of the apple and then make a cut to the left of middle about 1/4 inch and to the right of the middle about another 1/4 inch. Cut all the way until the knife stops out the knives or wood. Those act as guides so you don’t cut too far down.

Next, lay the knife flat on the butter knives and cut towards the middle of the apple, until a large wedge is taken out. This will be the first part of the wing. Repeat on the other side.

You will wind up with two wedges and a middle T piece which is the body of the apple swan.

Now it is time to make the wings out of those large wedges of apple. Take one of the wedges and lay it flat. Slide the butter knifes or wood against it perpendicular. Then come in about 1/4th of an inch from the top and cut down to the knife.

Place the knife blade on the slide and rest it on top of the handles of the butter knives or wood and cut towards the middle until the wedge is formed. Or you can just flip the wedge over and cut straight down again if you don’t want to cut it and slide it along the butter knives.

Now you will repeat the process a few more times.

These cuts that we are making and the little wedges will form the wing and give it some depth and the illusion of wings and feathers.

You should be left with 4 wing pieces.

To assemble the apple swan wings, take the large piece and lay it flat on one side. Then add the next largest pieces and then slide it a bit so it is offset. It will stay put on its own. Then repeat with the other wedges until the wing is formed.

Repeat the steps with that remaining large apple wedge until you have to full wings ready to go.

Place the wings on either side of the main body T piece. And there you go the apple swan body is complete. Pretty easy right?

Time to make the neck and head of the apple swan. Take the smaller half of apple and cut a thin slice, using the knife and butter knifes for a guide or you can try and do it without the guides. It should be roughly 1/4 inch thick.

Then make a cut at the top of the slice where it is slightly concave, this will be the curve in the swans face and the outside of the apple will be the back of the neck.

Make another cut on the inside of the apple piece, which will create the underside of the beak. Then cut down the apple forming the neck. You can make it as long as you like. Trim the bottom as needed depending on how you want it to sit in the swan body.

Take a seed and place it on the head, press it into the apple with the flat side of the knife blade. Flip it over and put another seed, for the other eye. The neck and head are complete.

Now all you need to do is create a spot for the neck to rest it. Use a knife and cut a small bit of apple out of the sloped part of the main body.

Now set the neck and head piece into that slot that you created, finishing the apple swan. If you would like to prevent it from turning brown, take some lemon juice and place it in a small spray bottle and spray it, or use a brush and brush it on.

Garnish a fruit bowl with these, serve it with some peanut butter, homemade fruit dip, or have it resting in a plate of melted chocolate. Or maybe make some sort of chocolate or graham cracker castle, and put down some blue fondant and rest this on top, and it could be the loch ness monster or apple dragon or something. So many fun ideas. Enjoy!

How long does the apple swan last?

Once it is made, if you spray it with lemon juice and wrap it tightly with plastic wrap, your neat creation will last 3 to 4 days. 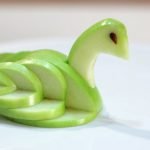 Time to impress your friends and family with this awesome apple swan! All you need are an apple and some knives and a bit of patience. Bring them to a party, add them as a garnish for a fruit bowl, whatever you like. If I can do it, you can do it!
Prep Time20 mins
Cook Time0 mins
Total Time20 mins
Course: Appetizer, Side Dish, Snack
Cuisine: American
Keyword: creative, fruit, fun, healthy
Servings: 1 person
Calories: 95kcal
Author: Matt Taylor

Do you like this recipe? Pin it! And please give it a rating and comment down below, I really appreciate it. If you make it tag me on Instagram @inthekitchenwithmatt. Also, sign up for the newsletter so you won’t miss out on any of my new posts and recipes.