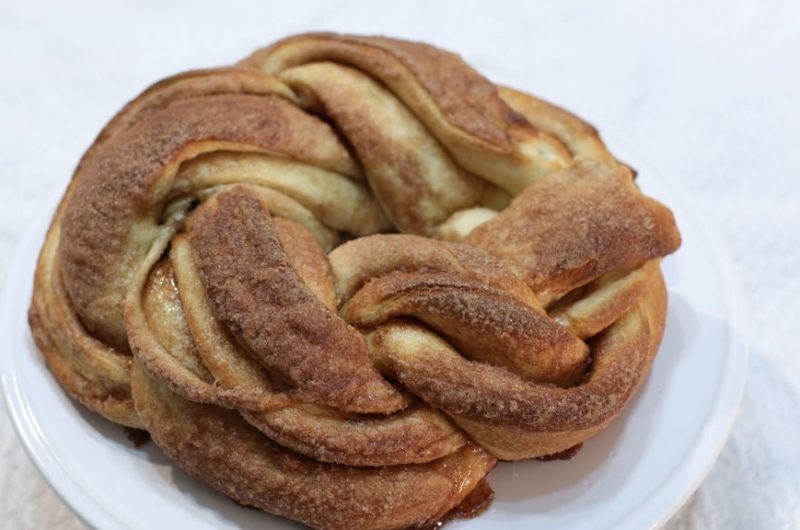 It reminds me of a cool edible wreath that you might hang on the door during the holidays. But let’s not do that, let’s eat it! This fun and tasty cinnamon roll twist bread is quite easy to make using the same cinnamon rolls dough recipe. All you wind up doing is shaping it a bit differently.

Whenever I am done making it, I always think twice about cutting into because it looks so awesome, but then the amazing aroma, is too much, and I dive in for a slice. It is so simple to make if I can do it you can do it. Let’s get baking!

There is virtually no different between the two styles of cinnamon rolls. The classic rolls, well, look like cinnamon rolls and will have a glaze or cream cheese frosting on them.

The twist bread uses exactly the same dough and pretty much the same filling and is rolled up, but instead of being cut into a bunch of rolls it is slit down the middle and braided, so the inside winds up being on the outside. And when it bakes it creates a nice cinnamon and sugar crust which is divine.

Of course you could still drizzle a glaze on top if you wanted to, but I never do.

In order to make this amazing cinnamon roll twist bread, we need to follow the steps to make the same dough from this homemade cinnamon rolls recipe.

You will need the following ingredients:

After you make the dough from that other recipe, knead it, and let it rise. Roll it out the same way you would for the classic cinnamon rolls.

Then baste the top with softened butter, again the same as you would with cinnamon rolls. Now mix together the white granulated sugar and cinnamon, and then sprinkle it on top evenly.

If you start the cut a little form the top that will keep those two ends of dough connected which helps with the braiding, but not totally necessary.

Place the slit dough onto a sheet pan lined with parchment paper or a silicone mat. If you slit all the way through the top, pinch those ends together and then twist or braid the two parts of dough together.

When you get done pinch those ends together. Then curl both ends and pinch them together creating the round wreath shape.

Loosely cover the cinnamon roll twist bread with plastic wrap and allow it to rise for about an hour.

Once the dough is almost done rising, preheat the oven to 375 F/190 C. Once preheated, remove the plastic wrap from the dough and place the pan on the middle rack in the oven. Bake it for 20 to 25 minutes until it is nice and golden brown on top and a cinnamon and sugar crunchy crust forms.

It will wind up being nice and soft in the inside, and crispy and crunchy and sugary on the outside, so yummy! Remove it from the oven and allow it to cool for 10 to 15 minutes before serving. And if you wish, you can make the same glaze from the cinnamon rolls recipe and drizzle it on top. Enjoy!

If covered in an airtight container, or wrapped in plastic wrap it will remain fresh a few days at room temperature, or about a week in the fridge. You may also freeze it if you like for a few months. 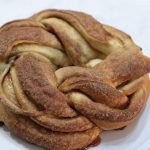