I am a huge fan of cinnamon rolls as well as waffles. Time to combine the two amazing breakfast items into one, yummy cinnamon roll waffles!

Cinnamon roll waffles are so easy to make, if I can do it, you can do it. Let’s get started!

In order to make these super easy cinnamon roll waffles you need just a few ingredients and tools:

Begin by heating up your waffle iron. Make sure to spray it with cooking spray as well. My waffle iron has an indicator light that tells me when it is heated.

If yours doesn’t have one, just let it heat up for about 5 minutes or so.

Open that canister of unbaked cinnamon roll dough, and place 4 of them in the center of the waffle iron.

Now close the waffle iron and cook them like you would normal homemade waffles or sugar waffles. Sugar waffles are a little closer to these since they are made from a dough as well, and not a batter like classic American waffles.

Again, my waffle iron has an indicator light that tells me when the waffles are done. If you don’t have one, just cook them for 4 to 6 minutes or so until they are nice and golden brown. Super easy right?

Use a fork to take the waffles off of the hot iron and place them onto a plate. Then use the icing that came with the canister of cinnamon rolls and spread it on.

I don’t normally put syrup on these because the glaze is already sweet. Although you certainly could forgo the icing and use some sort of syrup, like maple syrup, or even use this homemade strawberry sauce.

This is such a quick and easy breakfast or snack to make. Enjoy!

They are best eaten fresh, but you can keep any leftovers in an airtight container for a few days in the fridge. You can freeze them as well if you like.

Here are a few other recipes you may like: 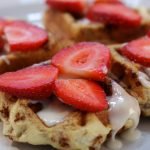 If you love cinnamon rolls and you love waffles, you will love these cinnamon roll waffles. They are super easy to make, if I can do it, you can do it!
Prep Time10 mins
Cook Time6 mins
0 mins
Total Time16 mins
Course: Breakfast, Brunch, Snack
Cuisine: American
Keyword: dough, easy, soft, sweet
Servings: 2 people
Calories: 561kcal
Author: Matt Taylor

Do you like this recipe? Share and Pin it! Please give it a rating and comment down below, I really appreciate it. If you make it tag me on Instagram @inthekitchenwithmatt. Also, sign up for the newsletter so you won’t miss out on any of my new posts and recipes.