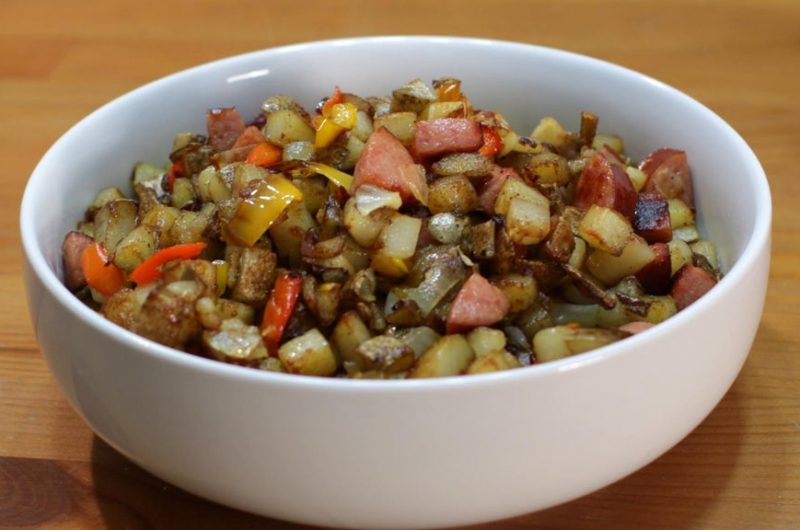 My mom would often buy the Ore-Ida brand Potatoes O’Brien with was frozen diced potatoes, onions, and peppers. When I was little I didn’t care as much for the onions and peppers back then, but now I absolutely love them.

We had many of breakfast that consisted of country fried potatoes, eggs, bacon, and toast. My all time favorite breakfast. I would cut the bacon and eggs up and mix it all together with the hash browns. Put on heaps of ketchup and feast. So yummy!

This recipe is really easy to make, and pretty versatile, if I can do it, you can do it. Let’s get started!

In order to make country fried potatoes you need just a handful of easy to find ingredients:

Note: The sausage/meat, peppers, and onion, are completely optional, you can make country fried potatoes with just potatoes and a bit of oil. But those extra ingredients kick the dish up a notch.

Step 2: How to make country fried potatoes at home

Begin by washing, drying, and peeling (if desired) the potatoes. Then cut them up into cubes, and place them in a bowl. I like to keep the cubes fairly small, but you can make them as large as you want. Smaller cubes brown/cook faster.

Sometimes I will let the potato cubes soak in saltwater for about 20 to 30 minutes to remove the starch which will help them get crisper. Or I will boil them in water for 3 minutes. And sometimes even put them in the microwave for 3 minutes. But these extra steps aren’t necessary.

If you do soak them or boil them, make sure to dry them after on some paper towels. Water and oil don’t mix together very well.

Chop up the onion and the bell peppers and even a jalapeno or two if you like.

Cut up the kielbasa sausage into small chunks as well.

While you are cutting things up, put about 3 to 4 tablespoons of oil in a skillet, and set the heat on the burner to medium to medium-high.

Cook the onions and peppers together for a few minutes, make sure to stir and flip with a spatula so they cook evenly. Use a cast-iron skillet or your favorite non-stick skillet.

Next, add in the kielbasa or your choice of meat. This particular kielbasa sausage comes pre-cooked so I am just warming it up and browning it a bit. If you use an uncooked sausage you will need to cook it longer, and probably want to do that in a separate pan, so you can discard the extra grease that it will produce.

Alternatively , you can start with uncooked sausage/meat in a pan, and once it is almost fully cooked, discard all but a few tablespoons of the grease and then add the onions, and peppers, and cook them with the meat, instead of using any extra oil. It all depends on the meat you decide to use if you decide to use meat at all.

Once slightly browned remove the mixture from the skillet and place in a bowl while you start cooking the potatoes.

Step 4: Cook the potatoes and finish off the homemade country fried potatoes

Add the diced potatoes to the skillet and start cooking them until they are browned and crispy. The longer you cook them the more crisp they will get. Stir them and flip with with a spatula as necessary to cook them evenly. Season them with salt, pepper, and garlic powder as desired.

Add back in the onions, pepper, and Kielbasa sausage mixture and continue cooking for a few minutes. Give them a taste with a spoon, (blow on it to cool it), if needed add more salt, pepper, and garlic powder.

After that, they are finished and can be eaten as a meal by themselves or served with bacon and eggs, etc. You may even want to put them in a breakfast burrito with a homemade tortilla. Enjoy!

Store any leftovers in an airtight container or ziplock back in the fridge for a few days. Reheat in the microwave or oven when ready to serve them again.

Here are a few other recipes you may like:

How to Cook Eggs in a Mason Jar Ring

How to Make Blueberry Scones

Dice Hash Browns or Country Fried Potatoes, whatever you want to call them, they are so yummy and easy to make. Serve them in a breakfast burrito, or eat them as a meal by themselves, or on a plate with eggs and bacon.
Prep Time15 mins
Cook Time25 mins
0 mins
Total Time40 mins
Course: Breakfast, Brunch
Cuisine: American
Keyword: crispy, easy, soft
Servings: 6 people
Calories: 389kcal
Author: Matt Taylor

Do you like this recipe? Pin it! Please give it a rating and comment down below, I really appreciate it. If you make it tag me on Instagram @inthekitchenwithmatt. Also, sign up for the newsletter so you won’t miss out on any of my new posts and recipes.