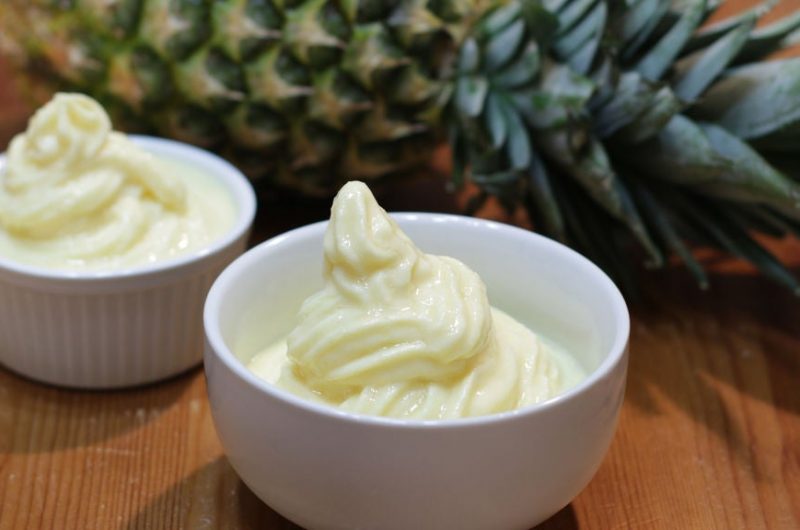 Time to bring a little Disney magic into your home. Disney released its famous Disney Dole whip recipe to the public while their parks were closed, well it isn’t the true recipe, but as close as we can get, making it at home. Isn’t that awesome?

It was so nice of them to do that. This way that beloved treat can be made at home anytime you want. For those of you not familiar with this dessert. Disney Dole whip is basically a pineapple smoothie with the consistency close to soft-serve ice cream.

And the cool thing is this desert only requires three ingredients! So cool. It is incredibly easy to make, if I can do it, you can do it. Let’s get started!

In order to make this delightfully refreshing dessert you only need these three ingredients:

Begin by adding the frozen pineapple chunks, vanilla ice cream, and pineapple juice to a strong blender. Now blend away. I usually start with an ice crush mode or grind mode and then work my way up.

You may need to add a bit more pineapple juice if it is too thick for your blender. Keep blending until all incorporated and smooth. If for some reason it got too runny, just add a bit more ice cream or a few more frozen pineapple chunks.

Alright, now the pineapple dole whip is ready to go.

Take a piping bag or plastic bag and add a star tip to it. Fold the top opening of the bag around your hand or a tall glass, which will keep it open. Then spoon in the dole whip.

Next, pipe the Disney pineapple dole whip into a bowl to serve.

And there you have it, Disney food magic brought to your own home. I told you this homemade Disney dole whip was easy to make. Time to dig in, enjoy!

Want a dairy-free version? You can visit the Dole website for their recipe.

How long does the Dole whip last?

You should serve it immediately after making it. Otherwise it will start to melt and turn into a smoothie, which isn’t too bad either. 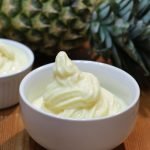 Disney released their famous Dole whip recipe while their parks were shut down. It is such a fun and easy and delicious treat to make. It only requires 3 ingredients too! If I can do it, you can do it. Time to bring some of that Disney magic to your home. Let's get started!
Prep Time10 mins
Total Time10 mins
Course: Dessert, Desserts
Cuisine: American
Keyword: cold, Disneyland, kids, pineapple, smooth, soft, summer
Servings: 6 people
Calories: 104kcal
Author: Matt Taylor