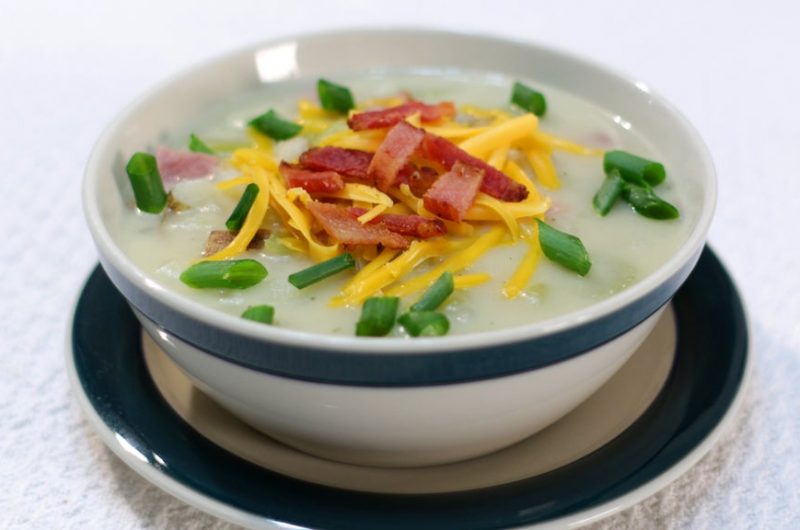 This ham and potato soup recipe is so amazing! It is probably my favorite soup to make and eat. One thing I love about the fall and winter is soup season.

When I think of cold weather, which isn’t often here in Phoenix, I think of warm comfort foods like homemade hot chocolate, tomato soup, and of course my favorite, ham and potato soup.

Ham and potato soup is so incredibly easy to make and tastes so delicious. Top it with bacon, cheese, and green onion, and it is warm spoonful of heaven with every bite. If I can do it, you can do it. Let’s get started!

In order to make these delicious homemade ham and potato soup recipe you need the following easy to find ingredients:

Step 2: How to make ham and potato soup at home

Wash the potatoes and then cut them up into small cubes/chunks. Place them in a large pot on the stovetop. Dice up the celery, ham, and onion as well and add them all to the pot.

Add the water and set the heat to medium-high heat. The water should cover the top of the ingredients. If it doesn’t just add a bit more water until it does. Bring the water to a boil and turn the heat down to medium. Allow it to cook for 10 to 15 minutes.

TIP: This recipe doesn’t have to be exact, in fact, if you want more of one of the ingredients add in more. For example, if you want more celery or ham, add more. It is your soup, make it how you want, but this will get you started.

Add the butter to a large skillet and allow it to melt over medium-low heat. Then add in the flour a little bit at a time, using a fork or whisk to whisk it in, so no lumps form. Keep adding the flour until all incorporated.

Slowly add in the milk, while stirring, until it is all added. Once all of the milk has been added keep stirring until it thickens up. It will take 3 to 5 minutes or a bit longer.

Smash up the chicken bouillon cubes and add it to the ham and potato soup. Stir the soup until the bouillon dissolves.

Now add in the white butter based roux. Stir it until the soup is well combined. Add in some salt and pepper to taste. Then allow it too cook for about 5 more minutes so it can thicken up some more.

And just like that the ham and potato soup is done. Super easy right?

Serve up a bowl and eat it plain, or you can top it with things like shredded cheddar cheese, bacon, green onion, etc. Enjoy!

How long does ham and potato soup last?

Place the soup, covered, in the fridge where it will last 4 to 5 days. You can also put it in a freezer safe container and freeze it for a few months. 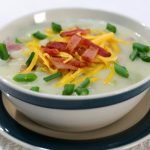 Note: The nutritional facts are for the soup itself, and doesn’t reflect any additional toppings like bacon, cheese, green onion, etc.

Do you like this recipe? Share and Pin it! Please give it a rating and comment down below, I really appreciate it. If you make it tag me on Instagram @inthekitchenwithmatt. Also, sign up for the newsletter so you won’t miss out on any of my new posts and recipes.