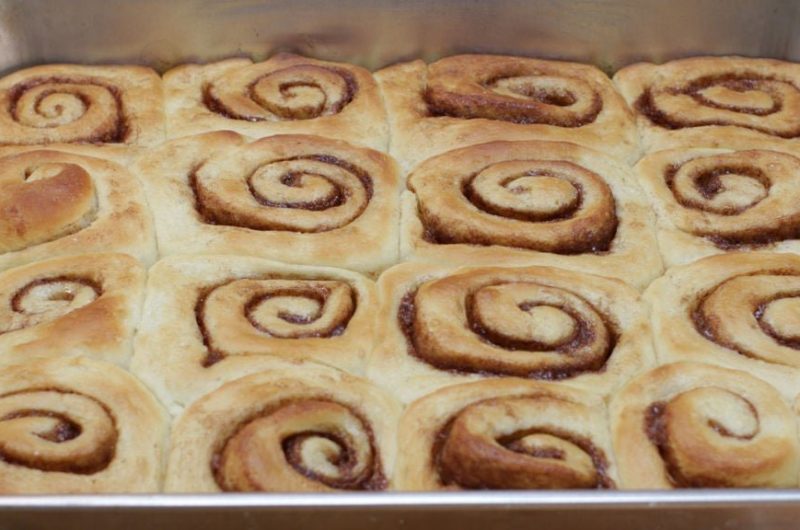 I love cinnamon rolls, they are one of my favorite things to eat for breakfast and throughout the day. These no knead cinnamon rolls are incredible! They are soft, pillowy, and full of flavor. If you like cinnamon rolls you will love these!

My other cinnamon roll recipe is fantastic so I am happy to add this one to the mix. You can never have too many cinnamon roll recipes right? For these no-knead cinnamon rolls instead of using a classic glaze on top, they will be topped with an amazing homemade cream cheese frosting. These rolls are super duper easy to make if I can do it, you can do it. Let’s get baking!

Step 1: Gather the ingredients and tools for the no knead cinnamon rolls

In order to make these delicious no knead cinnamon rolls, we will need to some ingredients and tools. You will need the following:

Step 2: How to make no knead cinnamon rolls

To begin, heat your water in a small bowl, to around 100 to 110 F (37 to 43 C). Then add about a tsp. of your granulated sugar to it. After that add in your yeast and agitate it a bit with a fork. Let the yeast sit until it gets nice and foamy, about 5 to 10 minutes. If after that it isn’t foamy, it is likely that the yeast is bad, or the water was too hot or too cold. I would start again if I were you. The last thing you want is to use all the ingredients for the dough and have it not rise because the yeast was bad.

Next, after the yeast is ready, add it to a large bowl. Melt the butter, and add it to the bowl with the yeast. Make sure the butter isn’t too hot otherwise it will kill the yeast. Add the rest of the white granulated sugar. and use a whisk to combine. Then in a separate bowl whisk the eggs. Combine the eggs with the other ingredients in the large bowl and whisk them all together.

Now add the salt to the flour and then add about 1/3 of it to the large bowl with the other ingredients. Use the whisk to mix the flour in. After that, set the whisk aside, the mixture will be too thick to use it any longer. Keep adding the flour and mixing it in with a wooden spoon until all combined. The resulting dough will be nice and tacky, which is what we want.

Place the dough in a very large bowl that has been sprayed with kitchen spray. Then cover the bowl with plastic wrap or a damp cloth and let the dough rise for 2.5 to 3 hours until the dough has tripled in size. I always use my handy dough proofer it creates the perfect setting for the dough to rise.

After the dough has risen it is time to make the filling. In a small bowl combine the brown sugar, the star of this dish, the cinnamon, and the vanilla extract. Use a fork or small whisk to mix them together. You may also use white granulated sugar instead of brown sugar if you like.

Step 7: Roll out that dough

Now, roll out the dough on a floured surface. Try and get it into a large rectangle table as best as you can. Then baste the top of the dough with some yummy butter. Oh, I do love butter. After that sprinkle on the brown sugar and cinnamon mixture. You can add other things too if you like, such as pecans, raisins, etc.

Next, roll up the dough fairly tight. You will wind up with a long snakelike bit of yummy cinnamon roll dough. Time to cut it up into rolls. A knife will work to cut the rolls, but sometimes it will smash down the rolls.

A little trick I learned way back in my 8th-grade cooking class is to use dental floss to cut the rolls. Pretty cool right? Take the floss and put it under the dough then cross it over the top and pull each end. It will saw right through the dough effortless creating a perfect cut without damaging the dough. Again, though, you can just use a knife if you wish.

Place the rolls in a large baking pan that has been sprayed with kitchen spray. I normally use my 13×7 inch pan, but you can use two smaller pans. Occasionally I will use both a 13×9 inch pan and a 10 inch round pan. Cover the rolls and allow them to rise for another 1.5 hours. They should double in size.

After the cinnamon rolls have risen, baste the top of them with butter. This is optional, but it does add lots of flavor, so I rarely skip this step. Then bake the rolls in a preheated oven at 375 F (190 C) for 15 to 20 minutes until they get nice and golden brown on top. Once they come out of the oven allow them to cool for about 15 minutes.

There are two kinds of people, the kind that prefers a classic glaze on top of their cinnamon rolls, and the others that prefer a cream cheese frosting on top. And then there is me, that doesn’t care as long as he has a freshly baked homemade cinnamon roll in his hands. In this case, cream cheese frosting it is. To make the frosting, add the room-temp softened cream cheese, butter, and vanilla extract into a medium-sized bowl. Cream those all together. Then slowly add the powdered sugar until well combined, scraping the sides of the bowl as needed.

If you watch the video tutorial you will notice I doubled the recipe. This is really too much for only these rolls but if you need extra for something else then double it.

Step 11: Frost and server those no knead cinnamon rolls

Now the only thing that is left to do is frost the tops of the cinnamon rolls. You can do it while they are still in the pan or just frost them individually, it is totally up to do. Then serve them! Enjoy. 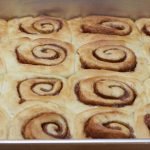 If you love cinnamon rolls then you have got to try these amazing no knead cinnamon rolls. They are super easy to make and taste so yummy! They turn out being nice and soft and pillowy and are perfect for breakfast, brunch, or any part of the day.
Prep Time20 mins
Cook Time20 mins
Rising Time4 hrs
Total Time4 hrs 40 mins
Course: Bread, Breakfast
Cuisine: American
Keyword: cinnamon, cinnamon rolls, cream cheese, frosting, pillowy, soft, tender
Servings: 16 rolls
Calories: 402kcal
Author: In the Kitchen with Matt

Here are a few other recipes and posts you may enjoy: